Its scientific name is Sparus aurata and belongs to the Sparidae family.
The gilt-head sea bream is a fish with blue and grey shades on the sides and silver-blue in its centerline (dorsal fin). It has a gold bar marking between the eyes and a black spot in the origin of its lateral line at the cover of the gills.
Its length can reach 70 cm. and its weight is 15 kilos! However, its most common weight in the Mediterranean is from 800 g up to 4-5 kg. It lives about 10-11 years in subtropical climates and we find it mainly in the Mediterranean from Great Britain to Senegal and rarely in the Black Sea.
It usually prefers rocky seabed but can also be found in sandy or muddy sea bottoms and seaweed ponds. Young bream are usually in shallow zones up to 30m depth while the largest in depths up to 150m.
It is a sarcophagus species and only complementary herbivorous. It is usually fed with crustaceans, mussels and mollusks. 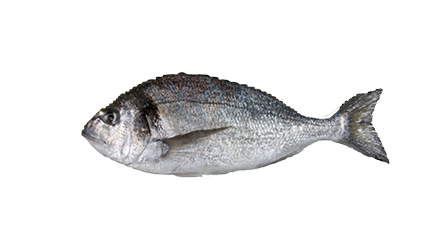 Its scientific name is Sparus aurata and it belongs to the Sparidae family. According to scientific literature, its length may reach 70 cm. and its weight 12 to 15 kilos! However, the most common weight in the Mediterranean is from 800g to 4-5 kg. It lives approximately for 10-11 years. Sea Bream is a wide-ranging benthic species, a fish that is met both in brackish as well as in salty waters and lives near the sea floor. It prefers sandy or muddy seabeds and seaweed beds; however, it can usually be found at a depth of up to 30 m., though the larger fish of the species usually move deeper (up to 150 m. depth). It is spread all over the Mediterranean, in the Black Sea and the Eastern Atlantic Ocean from Great Britain to Senegal, and rare in the Black Sea. It is a carnivorous species, but also consumes vegetable matter as a consequence of its benthic diet. It commonly feeds on mollusks, mussels, and shellfish.